The past few days have been busy with exploration.  Upon our arrival to the high altitudes, we spent a day at Gokyo (15,500 ft.), sorting gear and doing initial photo recon on some of the lake basins that we targeted in November 2012. Given the early thaw and relatively good weather, we decided to begin work on Spillway Lake earlier, before our foray to a small glacier at 17,500 ft.  So we crossed the glacier to Tangnak, a beautiful village near the start of the famous Cho La Pass.  The crossing took a bit longer than usual, as I kept stopping to take photos of the lakes and ice walls. 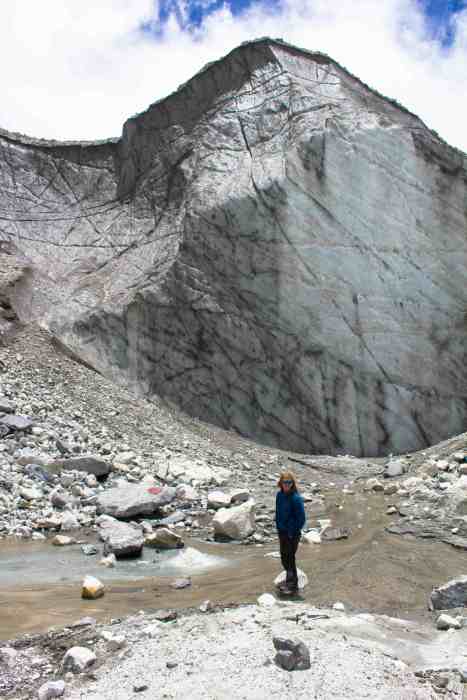 I’m impressed at some of these ice wall collapses relatively early in the melt season.

Once at “base camp” in Tangnak, I proceeded to sort through more boxes and bags leftover from November’s expedition.  After all the sorting and troubleshooting some of the equipment, we carried over an inflatable kayak, courtesy of Dr. Sarah Thompson; a few cameras and solar panels; a laser rangefinder; and a mini weather station to the glacier.  Using a homemade paddle, courtesy of Lhakpa, the owner of Cho La Pass resort, we navigated the waters and set up the cameras, as well as made measurements on North and East-facing ice walls.  These walls don’t melt as fast as South and West-facing ones.  They are pretty much the only ones remaining, as many other ice walls in the region have been recently covered up with debris.  Thus, through survey work (May 2013/November 2013/May 2014) with a laser rangefinder, a camera to take hourly photos, and ground-control point determination, we are better able to track their demise through time.

We also set up a mini weather station in the region, to track rainfall, air temperature, relative humidity, and barometric pressure. All of these measurements are important for determining how quickly and at what magnitude the glacier and lakes change throughout the year.  We will be setting up a similar station a few days from now, at nearly 2,500 ft. higher, to see how much melting is occurring at higher elevations as well.   All of this work took quite a while, as the sites were far apart, the winds were a bit strong and there were strong currents in the lake at some of the choke points.  We got quite the workout with all the paddling and battling!

I conclude with some interesting findings.  At one of my measurements points, we discovered a bubbling “glacier geyser,” in front of a massive ice wall at over 80 feet (~25 meters) tall.  It was spouting cold water and didn’t show any sign of slowing.  I wonder what its source is and if it will keep it up throughout the melt season.  I’ll definitely keep my eye on it throughout the coming weeks.  In addition, we have witnessed a partial drain (about a 3.5 foot drop in water level) in one of the lake basins already.  There is no evidence to suggest that the water ended up in the next basin, so, likely, it has gone down-glacier through an outlet point.